TELL MUM EVERYTHING IS OK 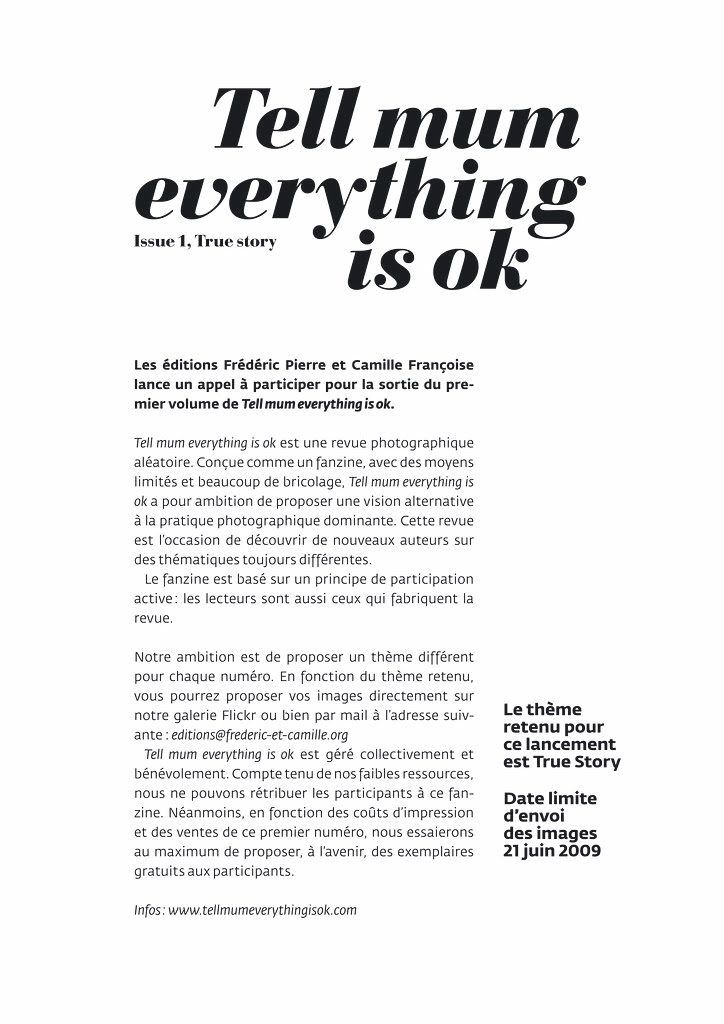 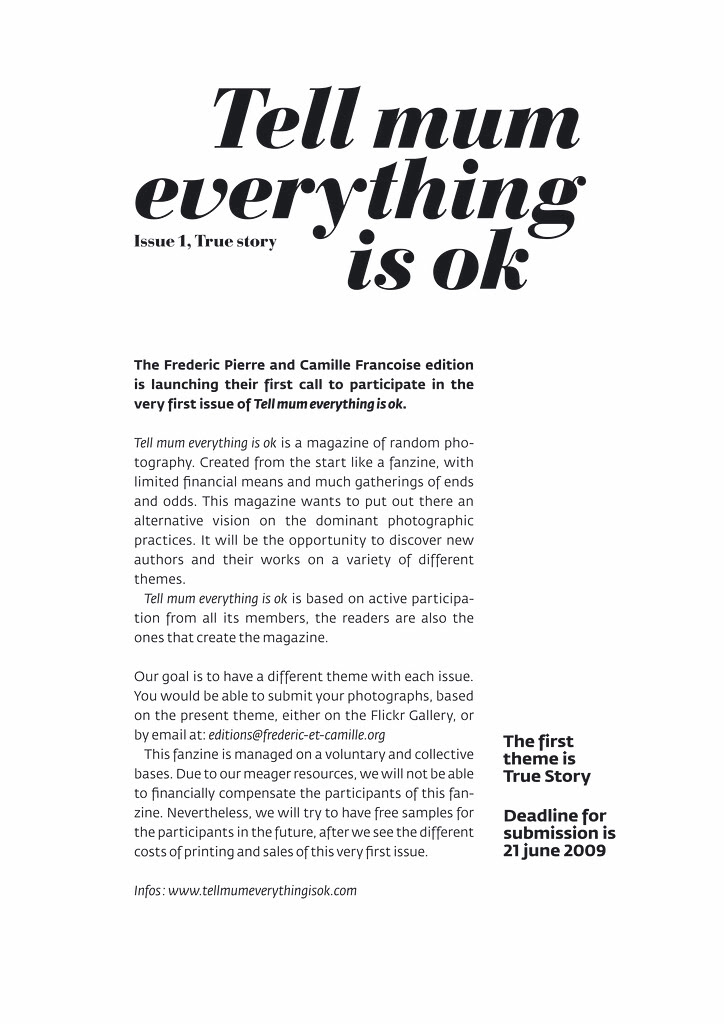 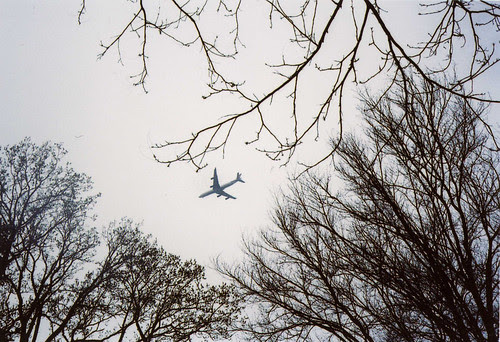 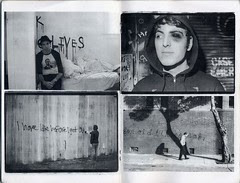 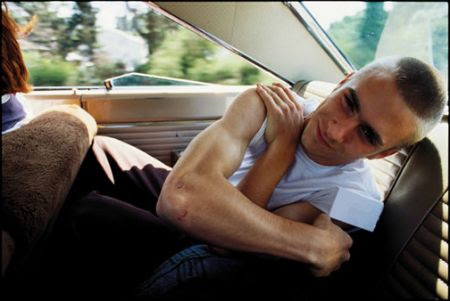 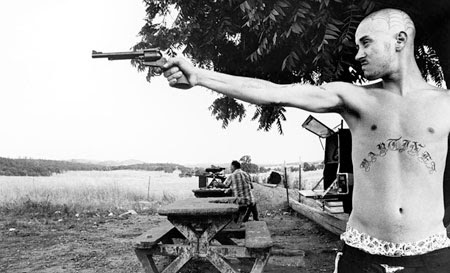 
Every time I walk into a bookstore the sheer number of titles on display constantly flabbergasts me. It is really overwhelming at times, not only because there is so much out there, but also that it all just seems to have become so corporate in recent years. Like everything else, it seems big business has taken over the world of publishing as well. Don’t fret too much though, because I’m constantly finding out about individuals whose actions discount this theory entirely. That doesn’t mean that we shouldn’t be aware, but it is important to remember that there are people who are doing things the way they want to (and successfully) regardless of the perceived power of big business or big brother.

A perfect example of this is a small Zurich-based publishing company with the enigmatic name of NIEVES. I first found out about them when I was contacted to contribute to a small art and culture periodical they were self-publishing called Zoo Magazine. I was immediately intrigued by their energy and do-it-yourself attitude towards magazine publishing. It turned out that Zoo was the dream of a young, twenty-something impresario named Benjamin Sommerhalder. Benjamin studied graphic design in college, but his intense love of magazines led him to abandon a design career in favor of founding Zoo in the late 1990s. Zoo was one of the coolest magazines around at the time. If I remember correctly, the first issues’ contents were compiled by Sommerhalder, but the model soon switched to having special guest editors for each issue. I guest-edited one issue, which we titled “Societe Anonyme” and the notorious Japanese cultural producer, Nakako Hayashi, edited another great issue I remember. Like many great things though, the magazine was short lived and after only two years Zoo Magazine ceased publication. Benjamin claims that due to the pressure and overwhelming high cost of printing, his original fascination with magazines eventually faded and his interests moved more toward publishing small run, limited edition books and in particular, photocopied zines.

The company that is called Nieves was officially founded in 2001 for this purpose. When asked why he made the switch in the company’s focus, Benjamin claims that he simply wanted to create a product that was cheap to produce and fast in the making so he would be able to publish on a more regular basis. The result of this effort is fantastic. In fact, Nieves could possibly be considered the world’s first “zine” publishing company. Never before has one person and a black and white photocopier been responsible for such a prolific body of work spanning such a diverse group of artists. When asked why he chose to publish in the zine format, Benjamin claims he bought a zine by Chris Johanson at Tower Records in Tokyo, “it was lying around on my shelf for quite a while before it became the piece that inspired me to start the Nieves zine series.”

Nieves now releases three new photocopied zines a month with an emphasis on artists who embrace a hand-drawn aesthetic as well as photography, illustration and graphic design. Each new title features one artist who has total creative control over the content. Highly collectable (I heard everything they make now sells out in three hours!), the zines are released monthly in editions of one hundred and fifty copies. To date, Nieves has published books by a virtual who’s who of young contemporary artists, including collaborations with people as diverse as Ed Templeton, Jo Jackson, Thurston Moore, Rita Ackermann, Larry Clark and more. A few years ago, Chris Johanson created a limited edition “art plate” for the company and Ari Marcopoulos recently completed massive three-hundred page photocopied zine for Nieves titled “Slouching Toward Brooklyn”. When asked how he chooses artists for his projects, Benjamin claims the choice of the artists usually takes place in various ways. “Initially I began working with artists I had met before but also picking new artists and initiating a collaboration with them. Nowadays, after five years, the decision of which artists to work with can be described as natural step or consequence of a wide network of friendships and collaborators.”

During the past few years Nieves has also become increasingly interested in strengthening the ongoing collaborations with some artists by starting the Nieves Book Series. As the title suggests, these are professionally printed and bound, full color publications. One could say this goes against the very ethos of the company, but surprisingly, even these nicely printed publications manage to maintain the look and feel as well as carry the same spirit of the zines. The first artists to contribute to this series have been Kim Gordon, Mike Mills, Yukari Miyagi (co-published with Happa-No-Kofu), Stefan Marx and Takashi Homma. The focus behind the books has been to produce, together with the artists, collections of mostly previously unreleased images and works. In line with the Zine Series concept, the artists are given free reign over the content but still with three conditions, Nieves chooses the page count, dimensions and print run.

When asked if there are any projects that have been his favorites, Benjamin claims there are too many to list. “It's nice and very interesting to keep working with one artist. My favorite publications are the ones with a special story behind it I think, or even the ones I didn't like in the beginning and grew on me over time.” This is interesting because Nieves itself has also grown slowly over time and because their growth pattern has been slow, the company has managed to maintain credibility where many organizations in similar positions have not. This is a manner of working which is honorable to say the least. In fact, it is a philosophy that really should be followed more often. In a world that seems increasingly obsessed with garnering commercial success at the expense of quality, any company or individual who chooses to do things at their own pace, regardless of outside pressure is refreshing and should be celebrated.